SpaceTrek is an advanced STEAM program at NASA Kennedy space center tours. The programs shine at preceding inventive technologies and content for teaching science, mathematics, engineering and technology with a space exploration background 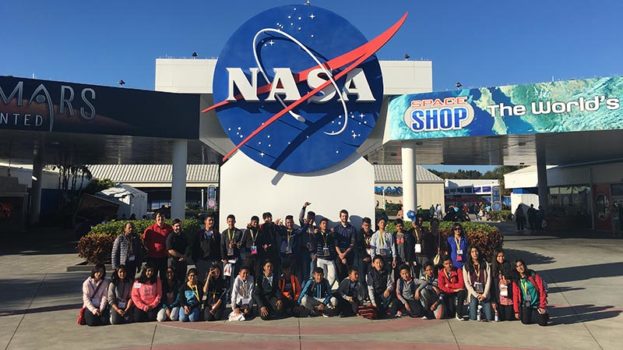 In this program, students are introduced to robotics and learn the basics of programming a robotic rover. They will also learn about NASA’s robotic exploration of MARS.Students work on teams to program a robot designed and built by the space trek team and printed on 3D printers endogenously. Students learn the globally used Arduino programming platform. A custom-made Lab-VIEW user interface (UI) is used to enhance the programming experience.

On the third day final team challenge takes place on a 16ft x 16ft mars surface mock-up featuring iconic Olympus Mons and Schiaparelli crater. Teams have to use all the precise robot movements learnt in the preceding days to successfully complete the mars surface mission. Victorious team is awarded medals.

This program is based on learning elementary rocket systems the basics behind rocketry and simple physics that moves them. It also gives an introduction to the history and the future of rockets as we know them at NASA.

Students work in teams to construct a WATER ROCKET using parts that have been designed, 3D printed and laser cut in the in-house fabrication lab. Individuals are assigned separate roles that stimulate how NASA engineers accomplish a rocket launch.

Teams then collect theoretical data from the bottle-rocket engine thrust acquisition (BETA) system and experimental data from flight computers and estimate parameters to launch their rockets within limited acceleration and to a specific height during the final contest.

THE CURRICULUM COMPONENTS UNDER ROCKETRY INCLUDES:

The group participates as one large team to successfully launch and retrieve a weather balloon, with a payload that travels up to 100,000 feet.

Each member is assigned different positions similar to those used by NASA, including flight director, safety officer, and payload integration, launch operations, and meteorology. Students learn to test equipment, use checklist and prepare all the components for the final launch. Using precise instructions students integrate the payload using flight computer and camera. Flight computer records variables such as humidity, pressure, temperature, velocity and altitude.

After the launch live feed of the balloon flight and views of Earth from the upper atmosphere are constantly transmitted to the ground station at KSCVC and analyzed by students and instructors.

THE CURRICULUM COMPONENTS UNDER NEAR SPACE INVESTIGATION INCLUDES:

From the above three listed programs, you can choose a program of your choice or can even club two programs together.

After a great learning session at NASA Kennedy space center tours , it’s time for our students to enjoy some amazing rides and end their day on a thrilling note!

Atlantis offers you an opportunity to select from a range of Disney theme parks and add universal studios and sea world to your visit.

In addition, you have a choice to add Disney’s water parks to make your trip more exciting than ever. Students visit the famous cocoa beach and premium outlets for shopping as part of the program.

Atlantis also gives the option to their students to opt for some amazing sightseeing during, NASA tours to make their trip a bit more memorable and fun. We give a variety of options to our students to choose from, these include:

Likewise Students can opt for any of the above all listed sightseeing on NASA Tours or can even club 2 of the sightseeing together on NASA Kennedy space center tours.