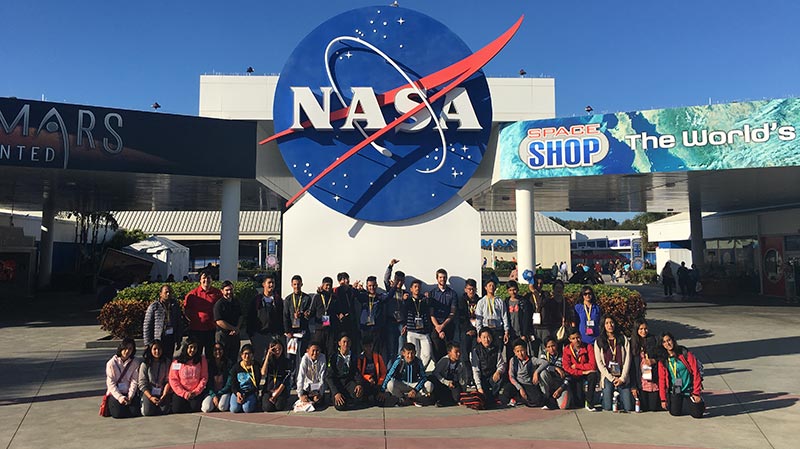 NASA is an inspiration to every young mind which has wondered about Space, astronomy, science, and research. A tour to NASA can be the most engaging experience that can be given to kids during their school life. More and more schools today are opting for educational tours to NASA. Let us take a look at what is special about a NASA tour.

The John F. Kennedy Space Centre is one of the ten field centers of NASA. It has been NASA’s primary launch center for human spaceflight since 1968. Atlantis offers a range of programs at NASA’s KSC with focus on STEM (Science, Technology, Engineering, and Mathematics) Education. During the tour, we promote learning through fun and students are encouraged to explore the various aspects of Space exploration and satellite designs.

Atlantis offers this unique program with modules on Robotics, Rocketry and Near Space Investigation. The program excels at introducing innovative technologies and content for teaching in a fun way leaving the young participants enriched and enthralled.

The modules are designed to give a real feel of Space Exploration Missions where students’ participate and engage in design and construction, hardware and software development. They get exposure to Arduino & NI LabVIEW based programming. A lot of focus is placed on simulations based learning.

While Mission Robotics takes you on a surface mission to Mars, Rocketry teaches the Physics and Math of sophisticated rocket systems. Participants design and launch a weather balloon payload with experiments to observe the atmosphere up to a height of 100,000 feet (22 miles) in the Near Space Investigation program.

It is one of the most looked forward to the section of a NASA tour. Participants get to interact with a real astronaut and hear first-hand stories from the space missions while enjoying a delicious meal.

Up and close with the Space Shuttle Atlantis

This spacecraft exhibit tells the incredible story of NASA’s 30 year Space Shuttle Program, the building of the international space station and the launch and maintenance of the Hubble space telescope. An incredible piece of engineering, it has interactive exhibits and high- tech simulators.

Be an Astronaut! – Launch into space and experience free fall

Have you ever wondered what it’s really like to be an astronaut at a NASA…strapped flat on your back in a fully fuelled spacecraft waiting for the space tour, waiting in anticipation for the final seconds of the countdown… 3…2…1…In the shuttle launch experience, you ‘get vertical’ in an all-too-real simulation of the space shuttle’s eight-and-a-half-minute ascent into orbit.

Experience the magic of crystal-clear, 3D IMAX® cinematography on the world’s only twin IMAX screens, each an astounding five stories tall. The films cover NASA’s bold plans and accomplishments and stunning visions of faraway galaxies and nebulae.

Starting with a NASA tour customized to 3 days, 4 days or five days, the tour experience can be supplemented with adventurous visits to the world’s best theme parks- Disney World, Sea World and the Universal Studios at Orlando. Since 2008, more than 6000 students have traveled with Atlantis on a US tour.

Destinations for an Educational Trip in India

10 Myths about NASA and Space Missions