SpaceTrek is an advanced STEM program at NASA’s Kennedy Space Center. The program excels at introducing innovative technologies and content for teaching science, mathematics, engineering and technology with a space exploration background. 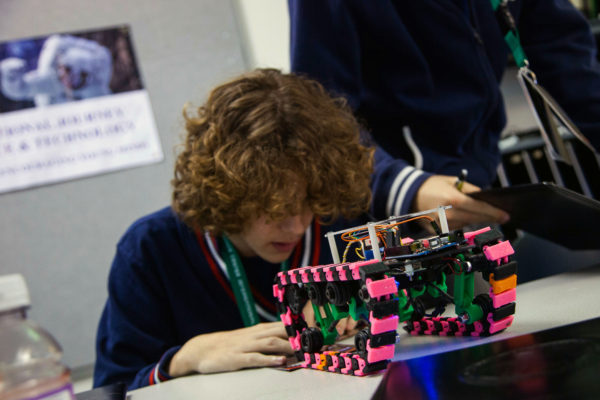 Mission Robotics takes you on a surface mission to Mars, where you must explore the surface of Mars and discover elements critical to your team’s designated mission. 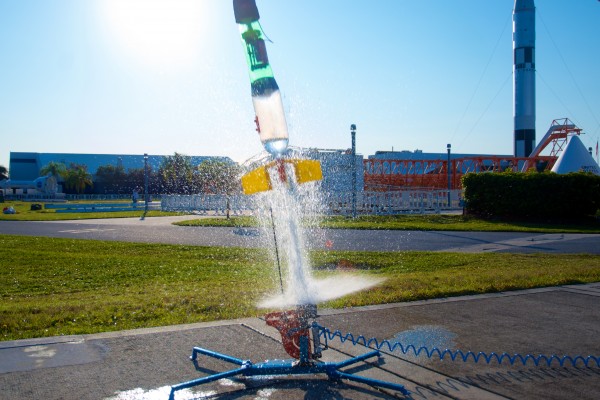 Students learn the basic Physics and math behind rocketry; design and construct a sophisticated water rocket system, and test their rocket engines. 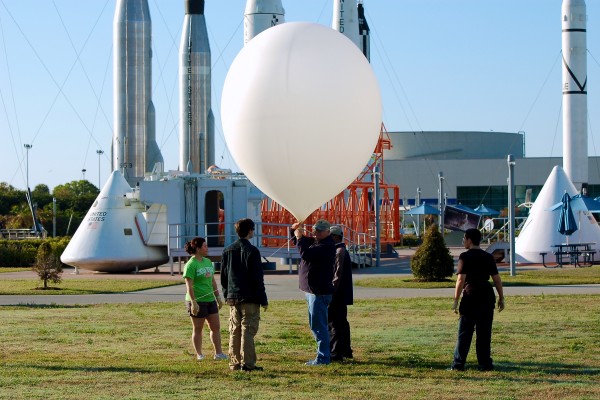 Participants design and launch a weather ballon payload with experiments to observe the atmosphere up to a height of 100,000 feet (22 miles). 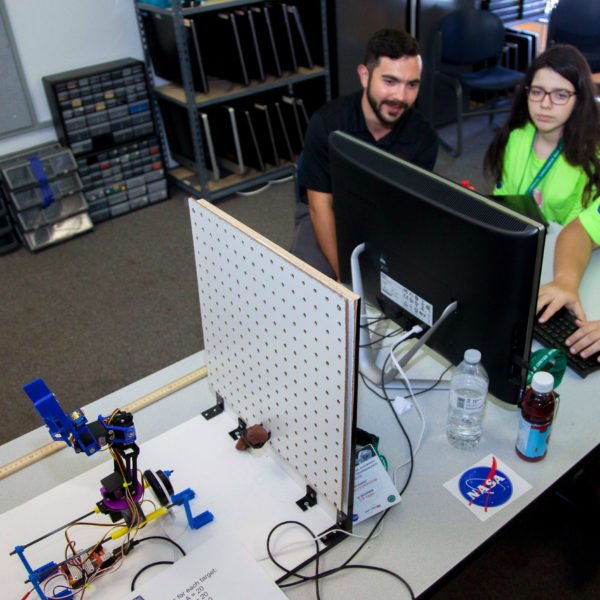 Together students will collaborate in teams to program a robot made of our in-house designed 3D printed components and electronics. While closely following instruction, teams must work to master particular programming concepts for their robots to complete challenges. Each challenge will become more difficult than the last as they utilize these concepts and build upon their programming knowledge.

The robot each team will have consists of two major features, one being the robotic arm and the other the robot itself. Teams will learn to program both of these features and to ensure success and retain knowledge, members of each team will separate themselves to specialize programming the robotic arm or the robot movements. Specialization will be an essential component of collaboration when the teams compete against each other during the final Mars surface mission.

The Mars surface mission is the ultimate challenge students will be preparing and practicing for on the final day. This challenge takes place on our 16ft x 16ft (4.9m x 4.9m) Martian surface mockup where the terrain is much like that of actual Mars with some of the iconic features such as Olympus Mons and Schiaparelli Crater. Teams will have to use all of the programming concepts, mechanical knowledge, and any other functions and skills they will have learned in the days with us alongside their specializations to complete the Mars surface mission successfully. With nothing more than a large map, a computer to program, and a wireless camera attached to their robot as their only source of vision students are isolated from the Martian surface as they try to remotely maneuver their robot to designated target areas for sample collection. Using a significant amount of teamwork to traverse Mars the teams must use their robotic arm to precisely collect certain rock samples scattered across the surface for study. Geological information will signal to students of possible nearby scientifically valuable samples through the use of radio frequency identifiers (RFIDs) embedded into the Martian surface that the robot can detect. Approaching these areas for collection can prove to be difficult as the robot must be commanded to navigate around tough obstacles such as large craters, valleys, descents, and ascents. The team that acquires the most points from all of the challenges throughout the 3 days will be victorious.

In this program students will learn the basics behind rocketry and some of the simple physics that moves them. They will also learn about the history and the future of rockets as we know them here at NASA.

Students will work in teams to construct a Water Rocket using parts that have been designed, 3D printed, and laser cut in our fabrication lab. Each team is comprised of individuals working together with separate roles that simulate positions on a small scale of how NASA launches their rockets. After construction, the students will choose these roles and have different duties based on each role they have been assigned.

Teams of students will then be in charge of collecting both theoretical and experimental data for their rockets. The experimental data will be collected using a flight computer and real launches of their rockets outside. The theoretical data will be collected using our uniquely designed and on-site built Bottle-rocket Engine Thrust Acquisition System. (BETA System).

The BETA System uses a force sensor coupled with high grade software and programming to collect data from their rocket’s engine. This thrust data is fed into the software and outputs useful data to help students understand the characteristics of flights and what affects them greatly. The BETA System is a transparent box such that students may watch their rocket engine as they tell us the parameters they want to test such as pressure, nozzle size, and water volume. Using the data collected experimentally and theoretically, such as peak velocity and peak altitude students are able to extrapolate flight characteristics. With this data and their results gathered through the entirety of the program teams are able to compete against each other to launch their rocket to a specific speed and height using their calculated and estimated parameters. The team that is most accurate in the challenge will be victorious and awarded medals. 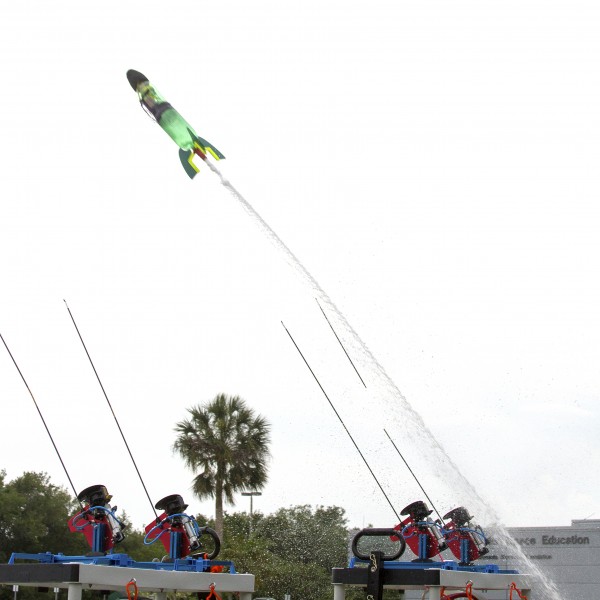 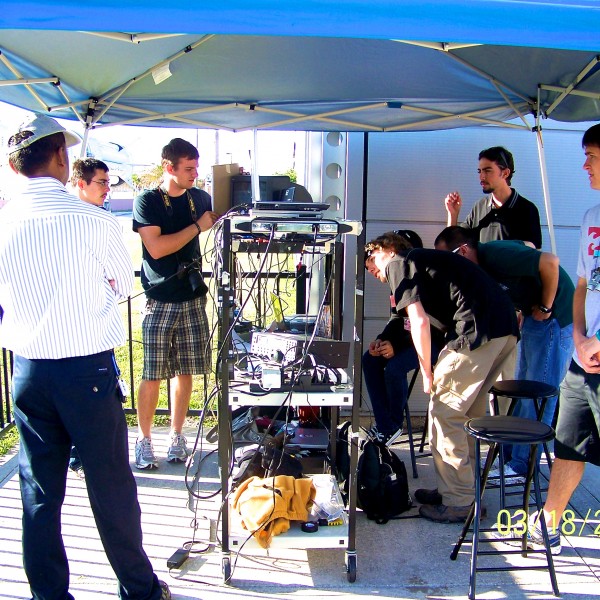 In this program, the group will participate as one large team to successfully launch and retrieve a weather balloon, with a payload that travels up to 100,000 feet. Students will learn about subjects such as meteorology, telemetry and how NASA takes different variables into account to perform missions, very similar to these. They will also learn about payload integration and how to plan and efficiently carry out a balloon launch.

The group will work on independent teams with students assigned to different positions similar to those used by NASA, including Flight Director, Safety Officer, Payload Integration, Launch Operations, and Meteorology. Instructors will train students to perform their tasks and then assist in operations as the students take lead. Emphasis is on communication amongst teams and to follow their roles to achieve a successful launch and recovery.  Outside of their roles, teams will also experiment with Arduinos and different sensors to get a better understanding of how the flight computer works.

Students will develop a payload to be sent on the weather balloon conducting experiments and gather results as it ascends and descends through the atmosphere. During the flight, a camera will capture images and transmit back to the ground station, enabling the group to see views of Earth from the upper atmosphere.

They will also learn how to test equipment, use checklists, and prepare all the components for the final launch. The main piece of equipment is our flight computer, which has the capability to record variables such as humidity, pressure, temperature, velocity, and altitude.

All programs at the Kennedy Space Center Visitor Complex include: 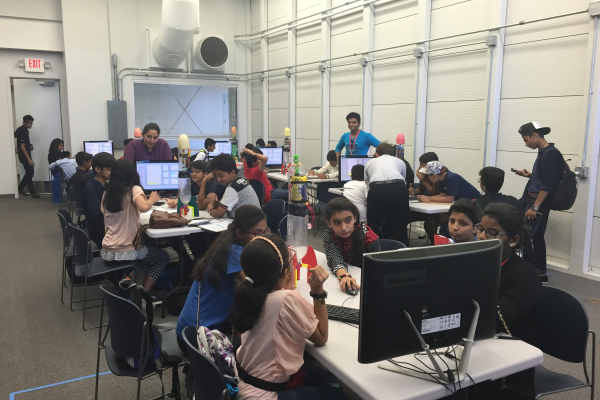 Space Trek participants take part in one of the most popular programs at Kennedy Space Center, ‘Lunch With an Astronaut’. It gives students and teachers alike a one-of-a-kind experience to meet a veteran member of NASA’s Astronaut Corps while enjoying a delicious meal.

Space Shuttle Atlantis showcases the priceless, historic spacecraft that tells the incredible story of NASA’s 30-year Space Shuttle Program. Space Shuttle Atlantis is displayed as only spacewalking astronauts have seen her before — rotated 43.21 degrees with payload doors open and its Canadarm (robotic arm) extended, as it has just undocked from the International Space Station.

Space Shuttle Atlantis features state-of-the-art multimedia presentations and more than 60 interactive exhibits and high-tech simulators that bring to life the complex systems and components behind this incredible feat of engineering. One of the most complicated and sophisticated pieces of equipment ever built, the shuttle is a vehicle that launched like a rocket, flew in orbit like a spacecraft and landed on a runway like a glider.

The immersive experience also shines a spotlight on the astounding achievements made over the course of the 30-year Space Shuttle Program, most notably, the building of the International Space Station and the launch and maintenance of the Hubble Space Telescope.

Also celebrated are the thousands of people who took part in creating and maintaining NASA’s five space-flown shuttles – Columbia, Challenger, Discovery, Atlantis and Endeavour – and how the shuttle program has paved the way for NASA’s next generation of manned spaceflight programs.

Have you ever wondered what it’s really like to be an astronaut…strapped flat on your back in a fully fueled spacecraft, waiting in anticipation for the final seconds of the countdown… 3…2…1…
Experience what veteran NASA astronauts call the next best thing to an actual space shuttle launch – Shuttle Launch Experience®, located inside the Space Shuttle AtlantisSM attraction.

Your journey begins as you walk up the gantry, hearing from experienced NASA astronauts as they share their personal recollections of their own missions into space.

Next, enter the heart of space shuttle operations for your prelaunch briefing, given by veteran Space Shuttle Commander and NASA Administrator, Charlie Bolden. Getting nervous yet? Don’t worry. Commander Bolden takes you step by step through the launch sequence, beginning four hours before launch and fast forwarding to the final seconds on the countdown clock. He even tells you what to do if you receive the dreaded 402 alarm… But there’s no time to worry about that – it’s time to enter the crew cabin and strap in. You’re about to “get vertical” in an all-too-real simulation of the space shuttle’s eight-and-a-half-minute ascent into orbit.

Sure enough, just as Commander Bolden described, you’ll feel the g-forces pushing you back into your seat as you hurtle toward the heavens at simulated speeds up to 17,500 miles per hour. Then as you begin to wonder if you’re really cut out for space flight, you suddenly reach orbit and the sensation of weightlessness takes over. For a brief moment, you feel as light as a feather, as if you’re floating in your seat. That’s just one of the incredible moments that astronauts live for –you’ll experience another as the shuttle’s payload bay doors open and you get a breathtaking view of Earth through an astronaut’s eyes – as a serene, cloud-covered blue marble set against a black, starlit sky.

Go behind the scenes at Kennedy Space Center (KSC), America’s gateway to space for more than 50 years. The KSC Up-Close Explore Tour takes you beyond the regular KSC Bus Tour and makes several stops where you can capture once-in-a lifetime photo opportunities

Along the way, your tour guide will share historical facts about the sights you’re seeing – vehicles, buildings and structures crucial to current and past operations. Your space expert also will give you real time updates on what’s happening at Kennedy Space Center and answer questions about the space program. Throughout your tour, you are surrounded by the natural beauty of the Merritt Island National Wildlife Refuge.

As NASA grows closer to once again launching crewed vehicles into space, many of the areas on the Up-Close Explore Tour will become off limits. Don’t miss your chance to explore where America’s space program began and discover for yourself where it leads next.

Experience the magic of crystal-clear, 3D IMAX® cinematography on the world’s only twin IMAX screens, each an astounding five stories tall.
Where will human space explorers go next? How will they get there? The new “Journey to Space” film explores NASA’s bold plans for deep space exploration using stunning space footage. Witness harrowing spacewalks performed to service the Hubble Space Telescope and the mind-blowing visions of far away galaxies and nebulas it has captured. Celebrity narrators Sir Patrick Stewart and Leonardo DiCaprio make your IMAX theater experience even more memorable.